We Told You Jujutsu Kaisen is Fire

There are numerous forms of acquiring bliss in this world, many, upon many, some are more fulfilling than others while the feeling is albeit the same and in recent weeks I have felt nothing but true glorious bliss, a bliss that could be described and explained in many ways but I shall use words that truly signify my bliss and these words are… “I told you Jujutsu Kaisen will be the best anime this season.”, Oh you think I’m capping, uh no that’s a fact don’t believe me then check out this blog I did back in oh guess what October! Here look at it!  I thought y’all were loyal yeah now imma pull out my pitchforks due to this betrayal!

There are many ways to describe Jujutsu Kaisen, freaky, crazy, weird, goofy, downright beautiful but without a shadow of a doubt Jujutsu Kaisen ticks like every check mark on that list, It came in with the hype of Black Clover but delivered on a par almost comparable to Demon Slayer, It had memorable moments and even broke the web but let’s jump into what makes this show so good, or at least seem that way.

After the juggernaut year that anime had last year summarized in one word, Demon Slayer, many of us didn’t really expect much from other or new anime going forward for a while, sure we expected good shows here and there with some sturdy performances but not anything groundbreaking, but Jujutsu Kaisen did not seem to get the memo and came in with its own heat, set in a world that had Tokyo Ghoul type horror, but yet filled with intensity that could get your heart pumping faster than the world's purest coke, Jujutsu came with a statement to make and a statement it did make, normally we’ve had the pleasure and horror of witnessing Shounen of this type come in with similar plots but completely get derailed eventually become boring or downright stale, with repetitive plots, uninteresting fights or simply not enough action, but it seemed as though Jujutsu took a script from Kimetsu cause everything about the anime just clicked, the animation is just drop dead gorgeous and the characters in that world are anything but dull, you fall in love in a heartbeat with the cast and although my disappointment comes in the lack of waifu material and the absence of a quality loli, I soon found myself stuck in a panic revolving the fact that an anime can still be good without any of these aspects, like imagine I watched an anime and did not find waifu material and I’m rating the anime above 8!!!

Jujutsu is without its flaws but the sad reality is that its flaws aren’t flaws in the actual show but rather the flaws that the community impose onto it. See, from the start of this blog i’ve used a repeated theme that is unfair to any anime, but a theme that is used in almost all reviews and that is, comparison, see Jujutsu is a quality anime and while it may have its flaws they are quickly blotted out by just how good the show actually is but because of timing it is almost immediately compared to Demon Slayer even if it was released 3 years from now it would have been compared to it regardless and that’s were the problems Jujutsu has lies and i’m not saying the issues are not valid in some cases but in most cases they are simply unfair, for example there was a fight scene in Jujutsu that so badass it broke the web, but yeah you guessed they compared it to Demon Slayer ep19 and the fight was on par with it but just and I mean only just fell under. Another aspect is that Kimetsu no Yaiba is mainstream and I mean mainstream the manga is so big it literally dethroned One Piece as the number one selling shonen of 2019, I know right, absolute madness, but it definitely deserved that and all credits to the show but that just goes to testament that you can’t compare these two as the hype around Kimetsu is so big it just swallows up anything and everything around it, I mean look at Vinland Saga. 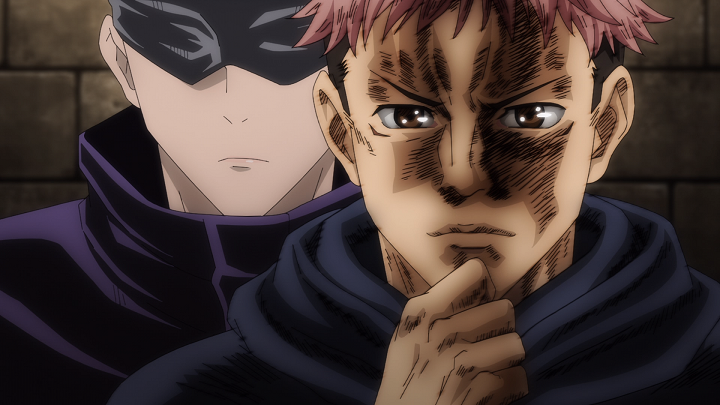 So the question remains is, Jujutsu the best anime this season, no… it’s the best anime this year, by a fine margin, like believe me when I tell you this anime is worth every minute of your time, but hey don’t take my word for it, head over to your nearest streaming service and check it out and while your at it don’t forget to check out our anime merch and see what goodies you can pick up!